The APS-1Zo/1P/DIN is a surge protection for PIR alarm detectors and alarm panel inputs against the effects of overvoltage and lightning. It is designed to alarm zones that do not use the doubling function. In the case of doubled zones it can only be used to protect the end detector.

It have two protection circuits with efficiency up to 10kA with a common ground for the alarm signal and power supply. The applied MOSFET technology reduces the level of surge voltages reaching the protected device.

This surge arrester is a universal device that can be used in alarm systems of various manufacturers and with any detectors installed inside or outside buildings (in additional hermetic enclosures). It is dedicated to protect detectors having outputs in the form of NO/NC contacts. It is not preffered for addressable detectors with digital transmission. Other protective devices should be used for addressable detectors.

The product has a housing mounted on a DIN rail and if it is necessary to install it outside the building, an additional hermetic housing must be used.

To ensure full protection of the alarm circuit, two identical APS-1Zo/1P models should be used on both ends of the cable or one in combination with other multi-channel products APS series. 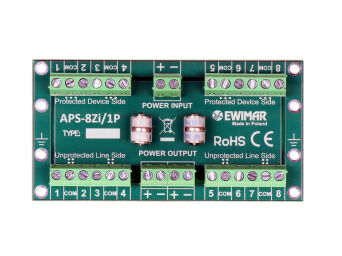 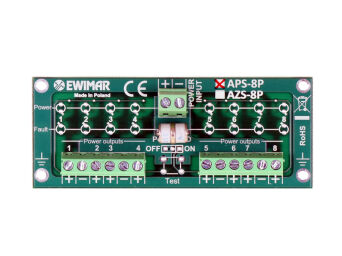