What is important during installation?

When designing and installing a surge protection system, keep the following guidelines in mind, which are important for their proper operation during an electric discharge.

When selecting a surge arrester to protect devices, one should take into account not only the place of their installation, but also the wiring path. The device can be installed inside, but when a part of the cable runs outside the buildings or in the vicinity of other cables that may be a source of danger, a dedicated arrester should be used for devices installed outside.

2. Maintaining the distance from the lightning rod

Keep the protected device as far as possible from the lightning rod and its cables. During a direct discharge, the ground is unable to absorb all the energy and some of it spreads out in the form of spark overs. The distance allows you to maintain a natural barrier against the penetration of large loads into the protected device. If the device is installed on the roof and the lightning rod wires are on par with the device, it is necessary to extend them. Otherwise, a direct discharge to the device can occur, which cannot be eliminated even by very effective SPDs.

The atmospheric discharge is a very short pulse which causes a skin effect in the wires. To reduce the resulting impulse resistance and increase the efficiency of discharge of the load to the ground, a stranded cable should be used. The grounding cross-sections of the conductors to the SPDs are subject to different properties than the PE conductors used for protection against electric shock due to the short duration of the impulse.

For surge arresters intended for protection of devices installed inside buildings, a wire with a cross-section of 2.5mm² is sufficient.

Single surge arresters installed outside, with impact efficiency up to 15-20kA, should be used with cables with a cross-section of at least 4mm².

When multi-channel arresters are installed in RACK cabinets, the total surge current can be high, therefore we recommend the cross-section of the grounding wire at least 10mm².

Both the grounding cables connections and all connections on the endangered side should be very solid. Improper contact will cause the contact point to overheat and even burn out. This carries a risk of improper operation of the arrester and failure of the protected device.

6. Placing the arrester close to the protected device

7. Securing the two ends of the cable

8. Not reversing the operation of the arrester

Entire content of this article together with photos is the property of Ewimar Sp. z o.o. and is legally protected. Prohibition of copying and sharing in part or in whole, or use in publications and public presentations. 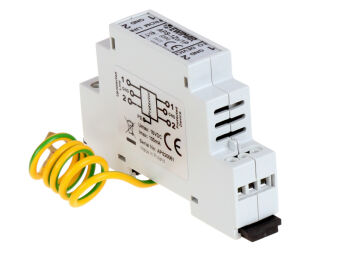 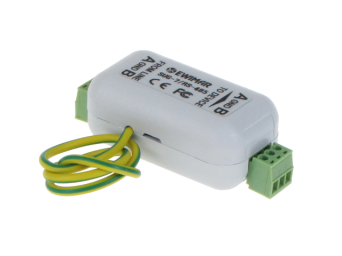