The APS-2B/1S protects alarm control panels against the effects of overvoltages and surge discharges induced in cables communication buses and external sirens. Two independent and configurable communication bus protection lines, allow for use in systems where there are separate buses for keypads and emergency line modules. For increase effectiveness of protection and elimination of damages as a result of potential differences, MOSFET fuses were used and jumpers built-in configuring surge protection for bus type: RS-485 or DATA / CLOCK. The effectiveness of protective circuits is 2kA for each wire conductor a high-value loads are discharged into the ground via a PE line. Because communication buses also use power,two independent 12VDC protection circuits were made for each of them, with an efficiency of 2kA.

The siren's protective path has a protective efficiency of up to 10kA on each wire of conductor of the cable, due to the installation of these devices outside and the high risk of penetration of large loads as a result of spark jump. The siren protection has been divided into one high-current (2A) and two low-current (100mA) paths.

The high-current power path is used to directly power the siren without its self-power or to supply the siren with a battery. The ground supply of this circuit has been separated from other arrester circuits due to the control panels that can control sirens ground or + power. Low-current paths are intended for use with the acoustic / optic control signals of signaling devices with their own power supply or their tamper circuits.
The product is made in the form of a module, mounted in a dedicated housing APS-BOX along with other modules that can create a comprehensive protection system for all alarm control panel signals. 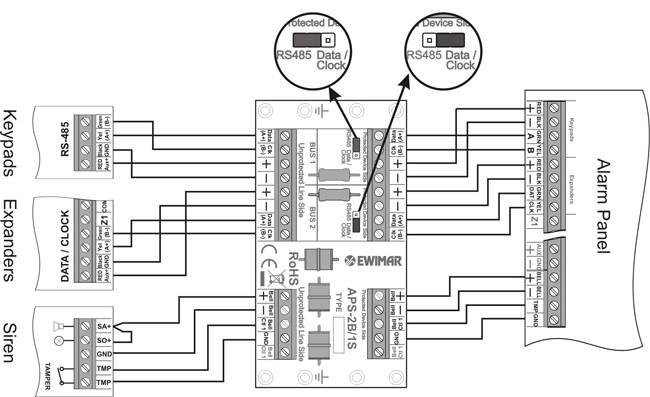 An example of siren protection without battery and two different bus lines. 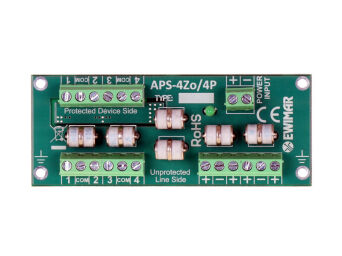 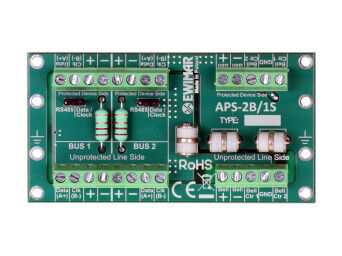