The converter is a microprocessor device, designed to control Geutebrück cameras with keyboards, DVR recorders or other control devices, using the Pelco-D or Pelco-P protocol. It is installed between control devices and Speed Dome cameras or Pan / Tilt heads. When installed in the middle of the distance between the camera and the controller, it extends the RS-485 bus length twice. It supports variable or constant speed commands, and special functions such as presets, Aux functions, wiper, sprinkler, etc.

A modern processor with powerful firmware ensure fast data processing and very fast reaction to control. It has one input port for the Geutebrück protocol and two independently configurable ports for cameras with the Pelco protocol - individually set protocols and adjustable baud rate in the range of 1200baud to 115200baud.

It is a 3rd series product, fully configurable and updated via USB using Ewimar Upgrader / Configurator software. This allows you to purchase and change the software to another one, which means that the unnecessary converter can be reused in other systems at a low cost. It also has additional software options that introduce advanced real-time translation capabilities - they are activated with license codes. 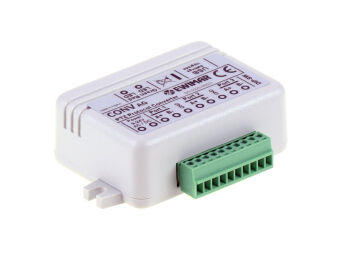